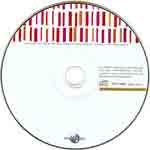 
Lisa Miskovskys "What If" was released on this promo album called "Singles Autumn 2001". This is a

songs was released on real singles.