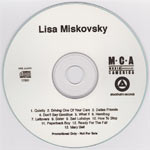 
A very rare US promotion release of Lisa Miskovskys debute album. This CD has the same versions of the songs as the official

first release of the debute album. I have two different US promos of this album and this is version 2.